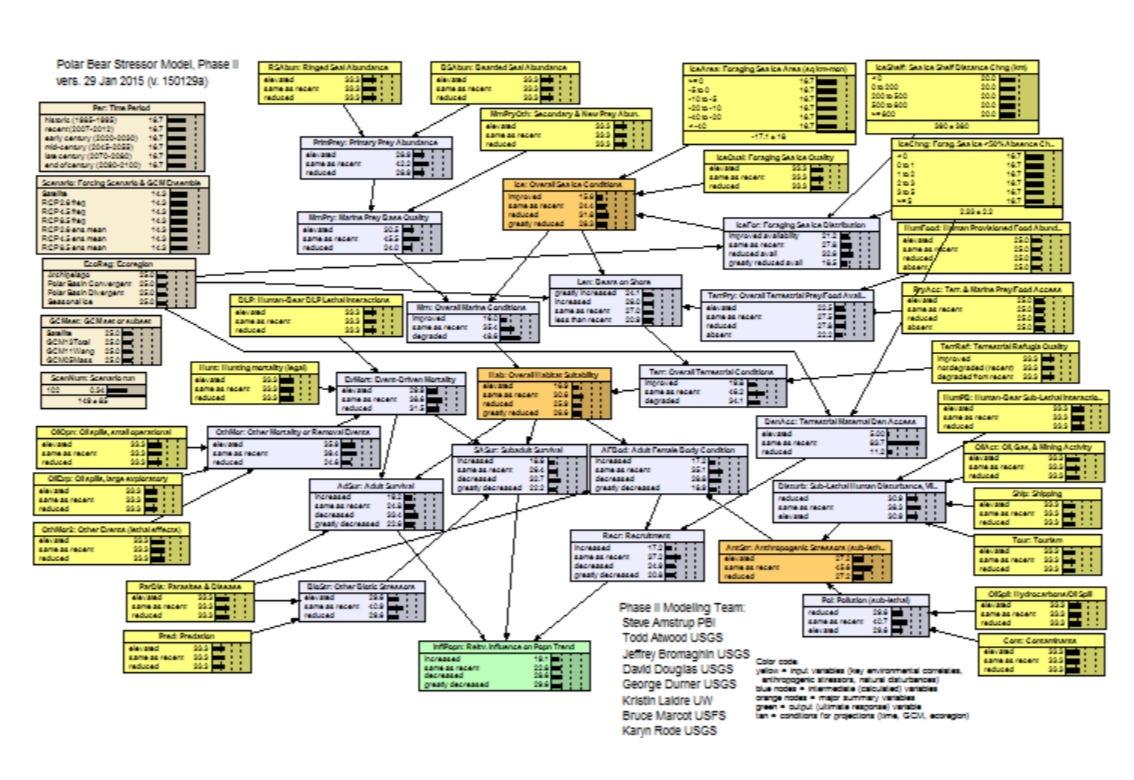 The polar bear (Ursus maritimus) was listed as a globally threatened species under the U.S. Endangered Species Act (ESA) in 2008. We updated a Bayesian network model (available at <abnms.org...>) previously used to forecast the future status of polar bears worldwide, using new information on actual and predicted sea ice loss and polar bear responses, to evaluate the relative influence of plausible threats and their mitigation through management actions on the persistence of polar bears in four ecoregions. Overall sea ice conditions, determined by rising global temperatures, were the most influential determinant of population outcomes which worsened over time through the end of the century under both stabilized and unabated greenhouse gas (GHG) emission pathways. Marine prey (seal) availability, linked closely to sea ice trend, had slightly less influence on outcomes than did sea ice availability itself. Reduced mortality from hunting and defense of life and property interactions resulted in modest declines in the probability of a decreased or greatly decreased population outcome. Minimizing other stressors alone such as trans-Arctic shipping, oil and gas exploration, and contaminants had a negligible effect on polar bear outcomes. A case file for the model can be found here: <abnms.org...>.

The Phase I Polar Bear Stressor Model can be found here: <abnms.org...> 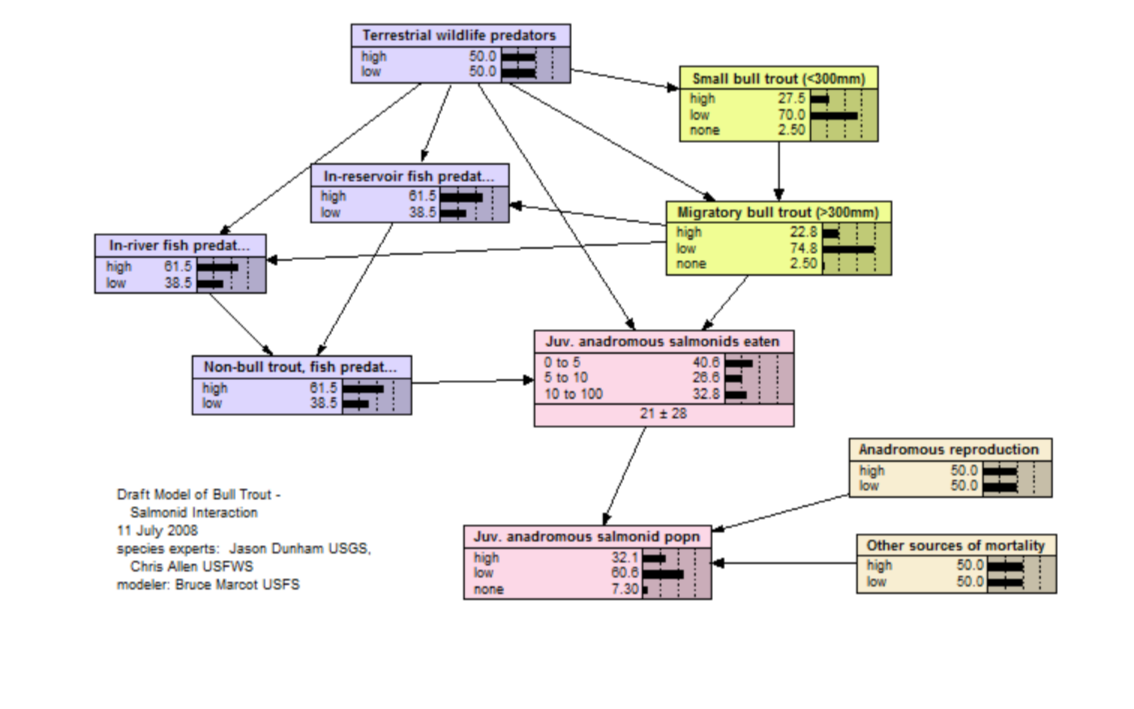 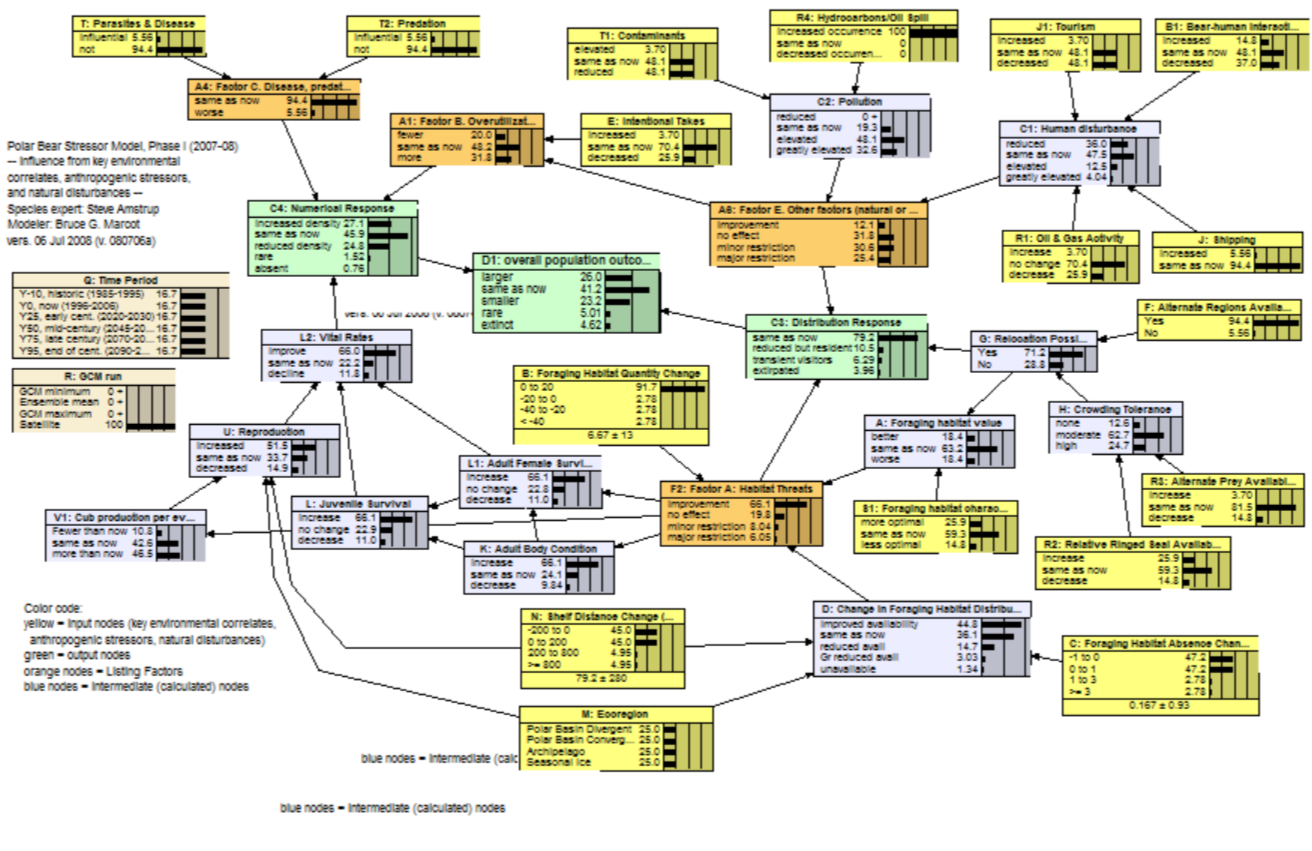 In 2007-08, to inform the U.S. Fish and Wildlife Service decision, whether or not to list polar bears as threatened under the Endangered Species Act (ESA), we projected the status of the world’s polar bears (Ursus maritimus) for decades centered on future years 2025, 2050, 2075, and 2095. We defined four ecoregions based on current and projected sea ice conditions: seasonal ice, Canadian Archipelago, polar basin divergent, and polar basin convergent ecoregions. We incorporated general circulation model projections of future sea ice into a Bayesian network (BN) model structured around the factors considered in ESA decisions. This first-generation (Phase I) BN model combined empirical data, interpretations of data, and professional judgments of one polar bear expert into a probabilistic framework that identifies causal links between environmental stressors and polar bear responses. The BN model projected extirpation of polar bears from the seasonal ice and polar basin divergent ecoregions, where ≈2/3 of the world’s polar bears currently occur, by mid century. Decline in ice habitat was the overriding factor driving the model outcomes.

Fraser Island in Queensland did not traditionally house Koala populations. However, since they were brought to the island they have provided benefits and have also caused problems. On a positive note, they are an attraction for tourists providing the island authorities with resources for maintenance. Conversely, they tend to disrupt the flora, even wiping out species of trees if they are not monitored. Thus, in order to maintain healthy populations without damage to the environment, the authorities can decide to cull a number of Koalas (inexpensive) or relocate to the mainland (expensive) where they are already well adapted. Additionally, animal welfare groups do not take kindly to culling.

Note: this is a fictitious example. 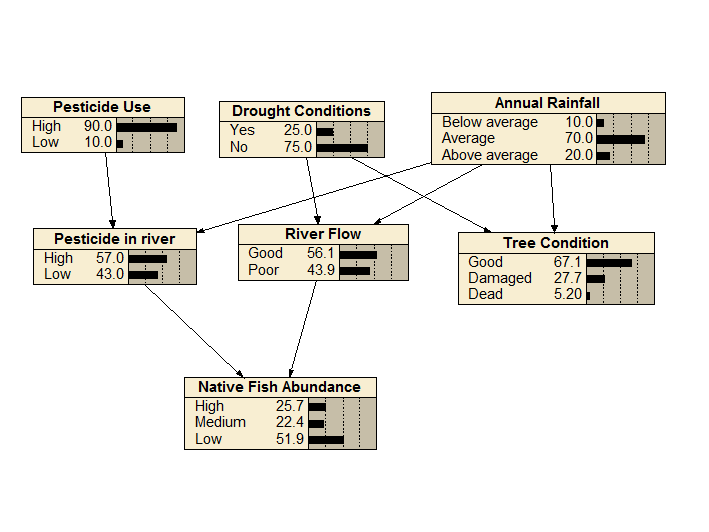 This BN calculates the probability of native fish abundance given pesticide in use and in river, drought conditions, river flow, annual rainfall and tree conditions.